Elsa: I am cleaning my studio and finding clippings, now yellowed, that I have been saving for years. Some I can't bear to part w/. This one by Bill Arnold was on p. 38 of an unnamed magazine. It is accompanied by an image of Ralph Gibson, John Collier and Robert Frank in a restaurant perhaps. I have always liked what it said. Once I made xerox copies and handed them out to friends. At each annual reorganization, I would reread the page and say to myself, well, this page I will keep a little longer. It still says something to me. And I have never FOLDED it.

A Statement About Portraiture 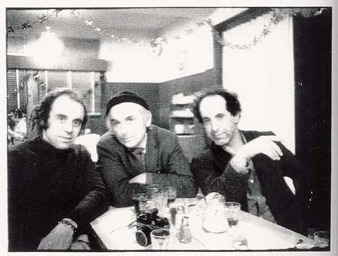 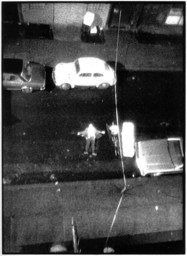 Portraits are one of the kinds of pictures I make. When I am making a portrait of someone I am always very involved with them, and at the same time, a part of me is quite separate from them. Usually, I don't look through the camera because I believe the posture of holding the camera to my face is limiting to me and distracting to the other person. Instead, I let the camera float in my hand. Sometimes it is at my chest or my shoulder, other times at arm's length above me or beside me. By allowing my hand to change the position of the camera I believe I use all my senses to photograph and not only my vision.

The camera I use has a clear viewfinder. Everything in the viewfinder is always in focus. Just as everything I see through my eyes is always in focus. Since the viewfinder does not need to be focused, the only other reason to look through it is to see what the camera is seeing (framing). However, when I'm riding a bike, I do not look to see where the front wheel is pointed. I have learned to use the same skill when photographing.

Most cameras have viewfinders which need to be focused. These cameras imply that you must know what to focus on. You focus on what is important, worthy of a picture. You know what is important before you focus and so the art of photography often becomes the process of illustrating what is already known or believed.

For me the process of making a picture is the process and the pleasure of looking for something. I don't know what it is I am looking for. The pictures are "finds" I have made while I've been looking.

I had a teacher in San Francisco John Collier, who said that to make a portrait you must synchronize with the other person's metabolism so that you can feel when they are about to be clear and focused. At that instant you must meet them with the shutter open.

Most of the time I open the shutter too early or too late. But sometimes I open it at an instant in which we recognize something very familiar, something we can make a story about and take along with us.

Musings Prepared for a Show in Japan 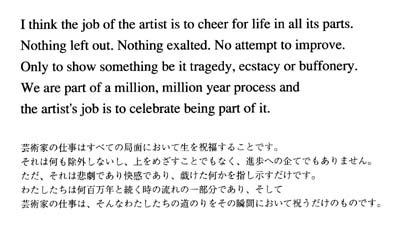 Comments of the Andreas Gursky Show, 2001

It is possible that the Andreas Gursky show at the Museum of Modern Art in N.Y.C. is the grand culmination of a vision in photography begun in the 1970s with the "New Topographics" which was exhibited at the George Eastman House. Prior to that show, photography supported at least 4 distinct approaches. There was the humanitarian/documentary of Lange and Evans. The confounding and surreal of Man Ray and Kertesz. The decisiveness of Bresson and Frank. The majesty of Adams. And the manipulation of Uelsmann. All had an affection for their subjects as well as the medium. The documentarians believed that injustice could be rectified. The surrealists trumpeted our ability to see into the bizarre. Bresson and Frank the bitter and the sweet all around us. Adams the Big Picture. And Uelsmann the wonder of an imagination. It was generally a youthful outlook for a young medium. But with the "New Topographics" photography matured. The realists claimed the forefront. They saw the ever-increasing sterility and coldness in society. And with the confidence of an adolescent, they showed us the inhumanity of where we live. We, being nurtured on drugs and shopping, supported this dire and simplistic view. We were shown a purgatory, but without souls. Now Mr. Gursky has trumped this desolate vision with majestic scale and luxurious tonalities. The colors may be slightly enhanced, but this reality in undeniable. The people are caught by the machinery and nothing is funny. Here is the proof of the inhumanity of life. Only photography could make that claim.

When Robert Henri championed the right of "Ash Can" painters to have their work exhibited, he was representing a group of like-minded artists. When Langston Hughes made his "literary manifesto", he was stating the intention of a group of artists to express their individual like- minded selves. If we call for a confab of artists, it won't be for everyone. Membership will be restricted to those artists who make us laugh or cry. Anyone whose work is so refined that it intimidates or so lifeless that it numbs, can't join.

If a call goes out for isolated ecstatics, who would come? How far would anyone travel to see a confusing picture of a real person? Or what about a landscape where mirth and foreboding sit next to each other? This is the Age of Simplicity. In the past, before we got so much information, things were complicated. But now with all the new data, we see that things are just terrible. So we withdraw into very busy lives.

Still I'm in favor of putting out the call for like-minded artists who play favorites. I imagine them to be low flying, high maintenance individuals with lots of friends from the past and a few in the present.