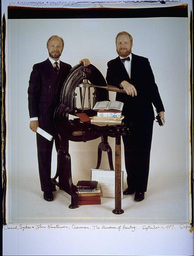 Firefly Press, now in Allston, MA, was started by Carl Kay right after he graduated from Harvard. He set up his first letter press in the window of his flat on Putnam Avenue in Cambridge, around the corner from where I lived on Flagg St. (Naturally, a web search uncovered another letterpress enterprise called Firefly Press in where-else? Portland, OR. certainly a spiritual sister city to Cambridge and Allston, MA. .)

I totally forget how I met Carl, but maybe he remembers and will read this and send me an email w/ the actual history. When we moved two blocks away from Flagg St to Franklin St., we became the owner of four cement block garages, a very common construction in our neighborhood. I don't know why. Maybe a cement salesman was on the loose in the twenties. The space seemed great for Carl and he set up shop.

Not too long after he set up here, Carl decided to turn over the day-to-day operation to John Kristensen, even then a talented printer of letterpress. Carl went on to develop his entrepreneurial talents in a more likely successful venture: Japanese Language Services. He moved to Japan, had more ventures, and eventually became president of the Harvard Club of Japan.

John and Firefly stayed in our garages until John had acquired sooooo much antique type he needed a bigger space. Miraculously, he found a wonderful studio in nearby Somerville, MA at 23 Village St. And the rest is history. Not quite. John moved to Allston, MA a few years ago to a fabulous building of many craftspeople: 119 Braintree St. #202. His work is incredible. He is an amazing person. And he has acquired a huge following. Many many devotees of letterpress. Many many honors from the fine printing world. He does business cards. He does wedding invitations. Wedding announcements. Letters of commendation. Small books. Scrolls. Poems.

This wonderful short film was made by Chuck Kraemer. You will hear John in his crisp language and see his wonderful machines and pieces of type.