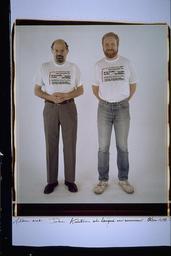 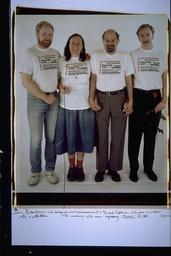 I fell in love w/ Neuland type the minute i saw it in John Kristensen's letterpress studio, FIREFLY PRESS. He had almost a full set of original type. It was designed by Rudolph Koch in 1923 who made it by carving the letters into metal. It was John's idea to use the type for an announcement of a show Allen Ginsberg and I were having at Brent Sikkema's gallery. It was Allen's idea to call our show "Family Living Can Go On Existing." That was a quote he found in Gertrude Stein. "Family Living " was the spirit behind his work and my work. The postcard looked great in red and black inks. Allen and I adored John's design for Koch's type. Neuland obviously meant "new land".

I cdnt resist putting the Neuland design on tee shirts to commemorate the opening of our show. They were printed at Rick Roth's tee shirt company, Mirror Image. At that time, Mirror Image was in a warehouse on Vassar St. in the middle of MIT. Now it is in Pawtucket. At home, on Franklin St, Rick's Green St. backyard abuts my framing studio and I can see his garden from my window w/ the air conditioner.

This was the beginning of my Neuland self. I have used the type for everything. And now on this web site, i use the version made for the computer. It is close to John's letterpress type made by Koch, especially if you dont compare the letters side by side. Whenever I see anything abt type, i always look up "Neuland" to see what they have and what they say abt Koch and his type.

There was life BEFORE Neuland. For years and years and years I had letterhead that Harvey had his friend Calvin Opitz make up for me. It had the tag line, "Some Day Your Prints Will Come" --because i was always late delivering photographs--and it had a luscious female draped over a large 4x5 camera drawn by Alphonse Mucha. That turned out to be prescient--cause a decade later there i was w/ a 20x24 camera. But NO DRAPE. I was wearing a denim skirt!!!!

Further back, in 1955-57 at Tufts I hung around the school newspaper which had its very own typesetting operation. A crew who could print anything and cd explain anything, had a linotype machine and a letter press. And the smell of ink.