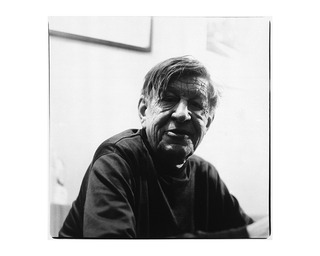 It was a little after Valentines Day, I remember that. But i don't remember the year!!!! I remember the month because on Auden's mailbox someone had put little hearts beside his name. It looked like the hearts had just happened.

I had found Auden's name in the phone book and had just called him. I dont know where i got the idea or why I wanted to take his picture. I dont think anyone asked me to take it for them. Somehow, i just did it.

We sat in his living room which was dark, at least dark for a camera that needed a lot of light. We talked abt bookstores. I took a few rolls of film, chitchatting abt Newfoundland, i think it was Newfoundland. Some country that had more bookstores per capita than any other country. I saved a few shots of film for the mailbox.

I didnt take notes. I didnt go home and write in a journal. I was pretty stupid. Now I am probably older than Auden was then. I think i thought i wd never FORGET.

I did ALWAYS remember that Auden was listed in the phonebook. That he answered his own phone. That he let me come over w/ my camera. He was totally courtly.