Photography and My Head

Relationships must have seasons and rhythms; constancy isn't necessarily the key. By taking pictures in my house, I get a sense of how things change every day. How my relationships change, the rhythms, who comes in, who hasn't come, who's busy, how busy I am, what I feel like tacking on the wall, what I feel like throwing away. How I feel with that chair in the corner, the trunk in the middle room. I have always had the feeling that everything is going to last forever; nothing is ever going to change. We'll never get any older and we're always going to be friends. I can take the picture today or tomorrow or in a week. It will be there.

The one thing that I've discovered about photography is that it emphasizes how life changes, how nothing is sure. When I wish I had a picture of so-and-so, I have to go out and take it right away. In fact, my intending to take a picture is the kiss of death... The building gets torn down, the person gets hit by a car. Things change. There are cycles. Since I have this urge to make everything very concrete, the camera is a natural instrument for me. I have the evidence. It's a constructive way of being controlling, of putting things there. I always have everybody; I don't have to worry about their going away.

My camera shapes my life and the way I approach it. It makes the occasion. Let's take a picture, I say. We are all together and in a good mood. Enjoying our luxury of being together. I get my Nikon out of the filing cabinet. I put it on the table, the window sill, or beside me on the floor. Nearby. It's there -- impossible not to be aware of it. But it's not a powerful presence for anybody except me. Half of my head is thinking, what will work, what will be good. Should I move over? [The answer usually, no, I opt for the sense/ease of it.] We stay put. Where we are. The other half of my head is into the conversation. Responding to it. There. My manipulation/seduction is naked. I want to elicit response from my friends/relax them. Create a circumstance I can't define before I have it, but recognize when it happens. That's it. The camera reinforces our high. 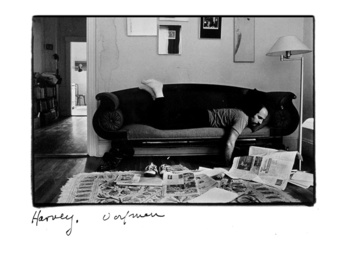 Of course; the couch pictures are posed. That couch demands a photograph. And marvelously, the photographs always/usually work. [There are only two or three good pictures of my lumpy red daybed in that space, e.g., Allen meditating. I've no idea what the Housebook would be like without the couch. Would I have said 'Let's take a picture' less often? Would my friends have been less inclined? A lumpy daybed not such a turn-on. Everyone sits on the couch with his/her memory -- of Dutch paintings, farce, nineteenth-century family tableaux. In Nantucket I went to historic houses and saw a relative of my couch tucked under a staircase, rolled side cushions, claw feet, but with straight back, no curve. I wondered, for the first time, who loved my couch before me? Who finally said, 'The couch has.to go. I want to put the new dumdum against the wall.' Or was the couch in an attic? How did it get to Antiques 'N Oddities?

The kitchen pictures are more easy. There's work being done -- or simply, eating. If it's winter, the kitchen is the only warmish room.

Sometimes, the camera is a drag. I felt more aware of it, myself, when Bob Creeley came here a couple of weeks ago. By then most of the Housebook was done. We were taking pictures for a reason, even if unstated. Maybe we'd get another really good one we could add to the pile. I had to interrupt Bob -- or pause. Reach for the camera; keep it on my lap. Be there with him; try not to be distracted. Interruption, however subtle, is part of the act of the taking, it seems. Bob, opposite me at the table, listening to me with attention, could go back to Bolinas, Buffalo -- anywhere, away from me, and write thirty pages about being in my kitchen. Do it at his ease and mine. My taking pictures of Bob was the equivalent of his taking notes while we sat and drank coffee, his yellow pad right there on the table beside the blueberries. Even among good friends, that stop for the machine/camera can be odd.

By now, the accumulation of pictures -- on the walls, in piles on tops of tables, on the floor in cartons -- has an effect of its own. Friends come, look at the pictures of other friends, hear about the visit of friends, are primed in a way for me to reach for the camera. They expect it. The camera's become part of the environment/experience so-called. They want the pictures of themselves to be good ones, they don't want anyone else to say, gee, those contact prints of so-and-so are awful. He looks washed out. So, there's a strong collaboration.

There are times when I put aside the camera. Forgo the image. When I say to myself, this minute would make a great picture, but it'll be ruined/over if I get out my camera. More of an intrusion than I want to be. For example, recently Bob and Eila were talking easily at dusk in the backyard. Eila telling Bob how much The Gold Diggers meant to her when she read it fifteen years ago in Chicago. How she still loves her copy of it, the small first edition, hand set and printed in Majorca. I watch them from the kitchen window. There is still light; the Housebook could use a casual backyard picture, I tell my self. I am dying to get my camera and go outside with them. But I know I'll change their whole scene if I do. I don't take the picture. Charlie Olchowski once told me Diane Arbus would do anything for a photograph -- absolutely anything, go anywhere, to get what she wanted. Befriend anyone. Expose herself to all kinds of relationships with all kinds of people. Since by now I know I have limits and see what pictures I miss because of them, I can understand how that willingness to go forward, that final act to do it, get it, take it is fundamental to her genius. It separates her from all the rest of us.