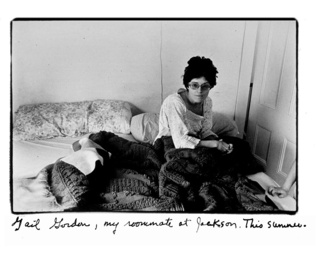 Gail Gordon has been my friend through thick and thin. She was my roommate at Jackson and later in New York. We even went to the same elementary school for a while in Roxbury, Massachusetts, but we didn't find that out until we met in our college dormitory. The years of trial were after college when I didn't know what I wanted to do. I was a constant monologue of confusion and fantasy, and I couldn't keep things together, like arrive places when I said I would, balance my checkbook, get the laundry done before I totally ran out of underpants. I had the notion that it was attractive to be suffering, it was what you were supposed to do if you were at all sensitive. People didn't just tolerate you when you were down, they loved you for it. [I don't know whether that idea was part of the fifties or, as John Limon says, it's an eternal delusion, at least since Rimbaud.) Gail listened to it all, with close attention but not indulgence. Slowly it dawned on me that her life was moving, that I'd better do something about my own.

The picture of Gail here is from summer 1973. She, Norman, and her two daughters Deborah and Julie came for several days. It was Julie's sixth birthday and we put up streamers, had a marvelous chocolate cake. It's a party. Deborah and Julie decorate my kitchen window shades with Magic Markers. Paint Styrofoam wig holders. Norman slaves over two old tires, trying to cut them with a meat knife to make swings out of them. But they're steel radials, and Norman breaks three different kinds of knife blades, swears, and won't give up. Finally, finally, they're cut. Then he has to tape the edges, the interlaced metal is so sharp. We sigh at all-American persistence. 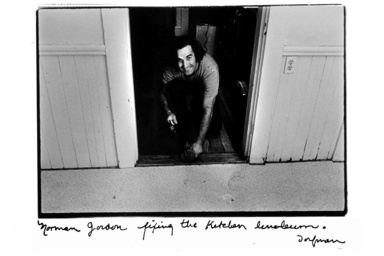 Over the years, Norman has puttered around and fixed all kinds of things in my house. In his picture here, he's working on the kitchen linoleum. He built the plant shelf in the living room, as well. When I had my show in New York City at Focus II, Norman helped Eila with the installation, following her directions to the quarter-inch. This meant placing nails carefully with a tape measure, banging them in, hanging the photograph against the wall, measuring to see that it was even with what was next to it, almost never the first try, and doing it all over again. While I frantically pleaded, 'Tell me what to do,' and tried not to get in the way.

I've known Gail Beckwith Mazur almost all my life. Our mothers had a friend in common, Sylvia Tarlin, a woman everyone in Jewish Boston knew and loved. So we saw each other occasionally and were invited to the same birthday parties. At Newton High we had several of the same classes and became close friends. We didn't see each other much in college or the few years after.

While I was living on Cambridge Street, I ran into Mildred Beckwith in Filene's basement and got a rundown on the grandchildren, Danny and Kathy. When I got home, I called Gail in Providence where she was living and that was that. We were back in touch. 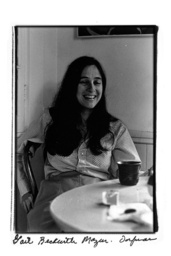 Now she lives in Cambridge and we talk on the telephone every day for almost an hour. About getting our work done: I must get into the darkroom; she must sit at her desk and work on her poems. We complain to each other. Console each other. Cheer each other on. Instead of commiserating on our mothers, how we can't borrow the car, stay out late, get a new sweater, now it's Harvey, Mike, Danny, Kathy, our work, And we love to talk about the people we know; try to figure them out.

Though I'm always good for a long phone conversation, I don't have quite this relationship with anyone else. Gail and I actually see each other every ten days or so, for a few hours in the afternoon. We're practically neighbors, so access doesn't explain why we seem to prefer the phone. I think it's because the phone lets us be personal and thoughtful; there's a confidentiality that seems impossible face to face. Talking over a distance, into a machine, can be mesmerizing. It must be why Harvey says most of the defendants he knows forgot they were being tapped. In the same tape he'll hear them say, 'I know we're being tapped,' and five minutes later, 'This is how we'll work it.' 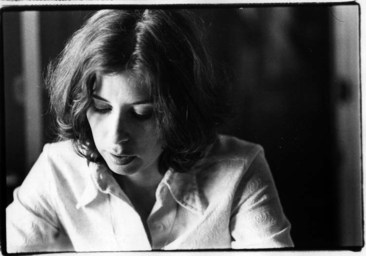 Ilene Lang and I are very proud of each other -- because our lives now are so different from the way they were when we met at Cambridge Computer Associates in 1968. She was a writer of computer user manuals and hired me to edit them for her. Now she owns two unique and innovative businesses in Harvard Square: Frameworks [home of do-it-yourself framing] and The Big Picture [instant posters].

We're very involved in each other's work and are sort of a mutual admiration/mutual support society. Boosters of each other. When I had my show at Boston City Hall, Ilene helped me set up a darkroom printing schedule for myself and dry-mounted all the final prints for me. At Harvard Business School she took a film course and for her major project made a ten-minute movie about me (called 'At Home, Elsa Dorfman']. Last year, on my birthday, she and Ed, her husband, did something very special. They found and bought a reliable second hand car for me. And somehow, because of the way they are, they made it very easy for me to accept the gift and to enjoy it. [Like a lot of people, I'm much more comfortable as a giver; presents can, if I'm not careful, provoke an argument over any obscure issue.)

Ilene's second store, The Big Picture, was my idea. I fell in love with the machine that made the instant posters, making sixty myself the day I discovered it. 'You have to do something with this machine; it's a gold mine,' I kept telling her. Every day for a year and a half. Not the least subtly. Finally, one morning she came over for breakfast and brought almond croissants. I knew something was up, though the croissants weren't necessarily the giveaway. 'Guess what,' she said, 'I'm beginning to think you might have something with that poster machine.' Six months later, she gave me 1 percent of the stock in the corporation and we opened a bottle of Mumm's champagne.